Here are the visitor stats for individual visits to Latinum for the past 60 days:
United States (US) 7,680
United Kingdom (GB) 1,494
Brazil (BR) 565
Canada (CA) 560
Australia (AU) 473
Germany (DE) 460
China (CN) 258
What is interesting, is that China is seventh...and has been steadily climbing the list over the past months. My question is this - are there many textbooks of Latin and other materials in Chinese-Latin versions? Looks like there is a possible… Continue

Why Shakespeare tickles the Brain - and thoughts on Latin

Research at the University of Liverpool has found that Shakespearean language excites positive brain activity, adding further drama to the bard's plays and poetry.

Shakespeare uses a linguistic technique known as functional shift that involves, for example using a noun to serve as a verb. Researchers found that this technique allows the brain to understand what a word means before it understands the function of the word within a sentence. This process causes a sudden peak in brain… Continue

A colleague of mine in the Neo-Latin world, was recently publicly expressing his skepticism of the Tar Heel reader project. Why, he said, don't you publish through a regular publisher? I tried to explain the utility of digital books, their application to the modern classroom, interactive white boards, and, most importantly, the ease of their distribution.
Can printed Latin children's books be found in bookshops up in the Outback? or small Pacific Islands, or in China?

Before Schola, the only other chatroom that regularly had people in it, was this one. This only sees action once a week, and has a devoted group of followers. It is necessary to register to use it. It is well worth a visit.

We need to remember how few people there are who have the ability or desire (different things!) to write
in Latin at conversational pace -… Continue

Today, I stumbled across a webiste that could possible prove very useful - it has affinities with the tarheel reader site:

Latin appears on the drop down menu of languages, but no-one has made any Latin resources yet.

The site is very simple to use - possibly even easier than tarheel reader: It has videos (which can be searched by category). You can easily write… Continue

The way I see it, the Latinum project is a Language Revival Project, similar to that put together for Hawaiian, and other dead languages, such as the Miami language.

The project has specifically been modelled after successful aspects of these revival projects - including now children's literature on the http://tarheelreader.org site, the chatrooms on http://schola.ning.com , the visual vocabulary sites on the http://imaginumvocabularium.blogspot.com , news aggregation sites such as… Continue

The first 50 dialogues of Corderius' colloquia are now on Latinum.

These have been formulated for students, so each line of dialogue is given alternately in Latin, then English, then again in Latin.

This lets the student listen, check their understanding immediately, then listen again to pick up new vocabulary/grammar.

100 dialogues will be recorded from this author, giving a useful… Continue

Conversation as an important part of language development

Conversing Helps Language Development More Than Reading Alone
ScienceDaily (June 29, 2009) — Adult-child conversations have a more significant impact on language development than exposing children to language through one-on-one reading alone, according to a new study in the July issue of Pediatrics, the journal of the American Academy of
"Pediatricians and others have encouraged parents to provide language input through reading, storytelling and simple narration of daily events,"… Continue

Getting Busy in the Locutorium

Things at the locutorium in Schola are picking up - Saturday was out busiest day yet, with 21 participants dropping in to the locutorium to chat actively ( we have a lot of 'lurkers', but they don't figure in the stats unless they actively contribute)

The chatroom has an archive, which keeps records for a few months. On Saturday, over 1 000 lines of Latin were composed off the cuff… Continue

Those who have been using Schola for a while, the site has had a bit of a make-over. It now looks much calmer, and the chat interface seems to be an integral part of the site, not an add-on.

It had become increasingly evident that the most oft used part of the site was the chatroom - on Sunday past, for example, the chatroom was busy continuously for a several hours....so the meebo chat interface has been moved to a more central… Continue

Latinum has been making me work hard - server trouble has meant a whole slew of episodes suddenly 'died' as the episode url's became unstuck.
I have had to delete a couple of hundred episodes, and am in the process of re-uploading..... Users are helping me, by notifying me of dead links - my priority is the Adler Course - most of which has now been repaired. I was hoping Latinum would just steam on, without too much maintenance needed.
Here is the map of site visitors for the last 2… Continue

In London, we are trying a new experiment - we have noticed members come along to the Circulus Latinus, but who don't have the skills to speak conversationally, but who are still very interested in Latin, as a 'performance language', for want of a better term.

We have decided to resurrect the ancient Collegium Poetarum online as an NING group, to seed something new. We will be holding our first meeting in London this… Continue

Laura Gibbs recently made an observation about the strange way declensions are taught in Latin textbooks, and in classrooms.

It is far more intuitive, and in accord with the way declensions are taught in modern declined languages, to teach them by case.

I decided to experiment with this with one class - the result was highly satisfactory. The outcome of this is a method I have developed, I call 'teaching with the hand', or Grammatical TPRS. This was my Eureka moment - that… Continue 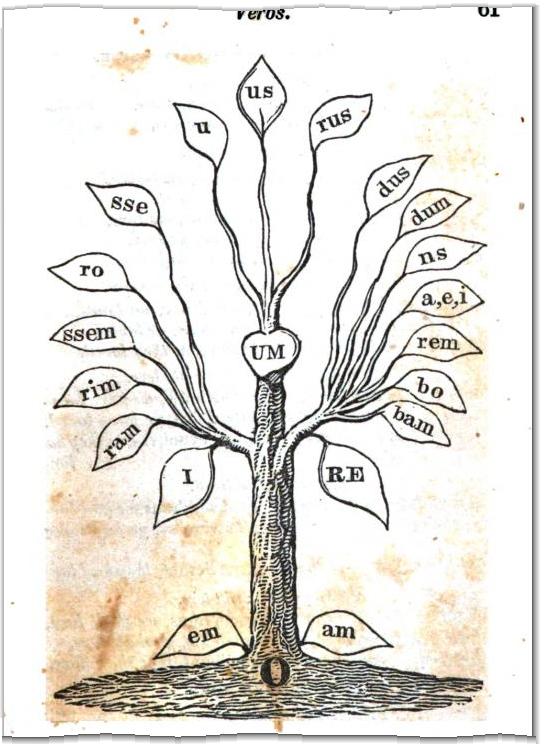 I came across this unusual verb tree in a text online.

Why social networks like this one are vital for the Classics.

Increasing population density, rather than boosts in human brain power, appears to have catalysed the emergence of modern human behaviour, according to a new study by UCL (University College London) scientists published in the journal Science. "Ironically, our finding that successful innovation depends less on how smart you are than how connected you are seems as relevant today as it was 90,000 years ago."

What relevance does this have for our subject area? We are now, as… Continue

A new wave of publishing is currently sweeping the Latin world – but these are not high works of literature, Vergil and Cicero, but beginning illustrated children’s readers, with titles like “Colours” and “ Who is that over there?”.

The surge has been made possible by a new interactive website, called the Tar Heel Reader, developed by Gary Bishop , at the University of North Carolina, in… Continue

The number of members on Schola has now reached the magic 999.
Who will be the thousandth member to sign up?
Since coming online in February 2008, Schola has grown rapidly, with a very international membership. Schola is the main hub to join, if you are looking for people to write to in Latin, or just want to hang out in a cool Latin place online.

Here is the current list of books that have been made in the past week or so:

Everyone is encouraged to have a go at writing at least ONE book. The idea is to copy the format of children's beginning literacy books in general. They can be very simple and repetitive, following a simple formula - kids love this stuff.
We don't have many books like this for Latin, and we need them desperately.

Latinum - one year of Stats

Latinum has now been online for over two years. I started collecting visitor statistics exactly one year ago. 62 000 unique visitors have viewed the site in the past 12 months, resulting in the map you see below: Downloads average 260 000 episodes per month. Total episode downloads since the site went online: 4,106,446

The Adler Course is now all recorded - if I were to do it again, it would be better,… Continue