On June 23, 2007, I had the opportunity to be one of nine American delegates (and sole Classicist) to the first annual Second Life Language Teaching Colloquium (SLanguages 2007). Sponsored by the Consultants-E, a UK-based eLearning company, the conference was held on the Second Life island of EduNation. The purpose of the conference was to gather language teachers together within the venue of Second Life to exchange ideas on how to use this virtual world as a platform for both language teaching and language learning. Papers were presented via PowerPoint slides and real-time audio which was supplemented with chat and instant messaging making the paper sessions more of a round-table and workshop rather that a sit-and-listen experience.


Although held in the virtual world, there was an undeniable global presence with diverse voices driving the discussion of Second Life as a viable language-learning platform. Rounding out the 50 seats at the international colloquium were language teachers from Poland, Spain, Germany, England, Scotland, Japan, India, Argentina, Brazil, Bolivia, Austria, Russia, Denmark, France, the United Arab Emirates, Italy, Australia, Korea, Uruguay, Canada, and Greece. In Second Life, however, we are all global citizens represented by Avatars (on-line, 3-D creations of ourselves in the digital world). English was the common language for all attendees, although some comments were posted in other languages and responded to in kind.

Matierals for the conference (including recorded audio and chat-logs and playable PowerPoint slide-shows) will be made available by the conference organizer later in the week. I will post the Second Life coordinates (as a SLURL) here as a link as soon as they become available. In anticipation of those materials, I have summarized the three papers I saw here.

Gavin Dudeney, presider over the colloquium, gave his introductory remarks from Spain. Second Life offers a unique ability to merge both content and language into an integrated learning environment as a real-time, 3-D language lab where students can interact with others, with bots programmed to behave like historical figures, and with exercises and drills that can be performed via virtual computers or via real-time interactions with characters and other digital elements yet to be realized. Modern languages are getting into the game quite early and have already established sims (environments within Second Life) to serve as areas to teach and learn.

Presenters Fire Centaur and Kip Yellowjacket (their avatar names in Second Life) delivered their paper together although Fire was broadcasting from South Korea and Kip was speaking from Germany. They both teach English as a second language (ESL) in their respective countries, but have opened ESL to the world via the
English Village sim in Second Life. 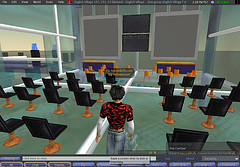 The English classes are provided at no charge to all who are willing to learn. Courses are often team-taught by volunteers to classes of two or three students (five to ten students was too much to manage for their sim at this time). Regarding Second Life language pedagogy at English Village, the team has moved away from the "sage on the stage" approach and merged into more integrated, one-on-one language classes where students interact with their environment and one another to learn language more organically.

English activities are planned for each session as opposed to more static language lessons. They have created a circuit-like approach to learning English where students move from station to station with tasks like quizzes and role-playing. There is also a guided self-study element with
Sloodle, integrating Moodle and Second Life, so that students can go at their own pace and upload data to Moodle when they complete their lessons.

New tools that are available (or are becoming available) for language teaching in Second Life include real-time voice-chat (via headset or computer microphone -- coming July 10) and the "Second Life for Educators" group on
Facebook (over 600 members). Popular course/content management systems that can be integrated into Second Life courses include Moodle and Joomla. There is also a Sloodle "treehouse" where educators new to both Moodle and Second Life and practice uploading/downloading content between the two platforms.

Educators are quickly realizing that they can get away from traditional drills and can be more creative with feedback. One example given was that a student's avatar grasps a rope over a pool of quicksand in order to start a language quiz. Correct answers rescue the avatar while incorrect answers lower the avatar into peril.

Some not-insignificant problems with teaching in Second Life include prep-time for each class. Text is treated as a "texture" as opposed to real, streaming text (as when you type), so there is the need to create dynamic text tools to facilitate easier test and exercise content creation. Also, the English Village has had to employ volunteer technical assistants to handle n00bs (both teachers and students new to Second Life) as they learn how to navigate the interface. Punctuality is also an issue as students often fail to make class (or at least be on-time within Second Life). One way around the punctuality issue is to use a Second Life wiki/calendar tool to post updates and reminders for students and faculty. Community-building is also key to these courses: if everyone is engaged in the learning process, the fewer students get left behind.

After the 45-minute presentation concluded, we had 15 minutes of q&a with the speakers (and with each other) to discuss language learning in Second Life. This was done primarily via chat. Topics ranged between college and high school IT firewalls and Second Life to the impact of real-time voice technology and learning languages.

Our second speaker was Shug Beck, a teacher at the
Dunoon Grammar School in Argyll, Scotland. He delivered his paper from home while his pregnant wife (nine months pregnant) slept in the next room. His presentation dealt with "virtual grammar" in second life, or how to create/identify elements within the Second Life classroom context. His school is using Second Life classrooms for distance learning as the district that the school serves if geographically diverse and rugged -- students often have to commute between 1 - 2 hours to school. In the virtual world, there is no commute. The virtual school was hosted on EduNation island in Second Life (and was moved to its own island -- run a search in SL to teleport to its location) and allows instructors to upload audio, video, and PowerPoint presentations into individual classrooms. There were initial problems in pitching Second Life to school and district administrators, more out of a lack of comprehension of IT than anything. Students also needed to upgrade their computer hardware in order to use the Second Life software, but this cost was offset by the district.

When Second Life classrooms were made available to the students, the young people (ages 13-17) were quite keen on using it, and proved adept at manipulating the new technology. As the classroom and island were being built, the students were consulted on its construction so that they would have a vested interest in what they were creating (aka terraforming in Second Life). The school, once completed, was decorated with student artwork. During the virtual school's creation, a database was created that would silently record student attendance and allow for the uploading/downloading of assignments.

The speaker recommended visiting the
Castlebrae High School site for another example of an education island success story. They have created special avatars for q&a with famous authors (like Shakespeare). For another example of interactive literature, see the Second Life Literature Alive Project.

Dunoon Grammar School is also archiving student projects completed within Second Life for use both by the school and other schools world-wide. Mr. Beck also said that for his students, Second Life is completely engaging and allows 24-7 access to lessons. Beck also seconded the current criticism of Second Life in that its lack of text manipulation ability is a real problem, but that this is a problem that can be solved by both educators and Linden Labs, the creators of Second Life.

Thanks to two forward-thinking Scottish MPs, Scotland is making education in Second Life a priority, and is merging the money and talents of the private sector with the educational content of school districts to create genuinely dynamic and rich learning environments for Scottish schoolchildren.

The final paper that I attended was given by Nick Peachy of England on the topic of designing a language course in Second Life. Peachy works for
LanguageLab.com which specializes in creating eLearning environments for language teachers. This revolutionary paper opened my eyes to the real potential of Second Life as a viable platform for teaching Latin and Greek, but could be applied to any language. 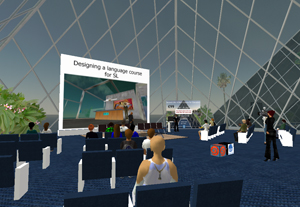 Peachy, an ex-teacher, admitted to being bored with standard textbooks and started designing his own eLearning materials for his classes which included multimedia content. These classes became so well received that he moved to programming full-time. With Second Life, one can get away from classroom learning entirely, shifting the pedagogical paradigm from the classroom to total-immersion learning. He is thrilled with the fact that Second Life will go live with their live voice-chat on July 10 as, in his words, "text chat doesn't cut it for language instruction."


Peachy spent a few minutes reviewing the concepts of the
Flow theory of education from the 1960s, where students concentrate on goals with a doable chance of success. He also reminded the group that the students being educated today are "digital natives" who are "networked all of their lives" and have a "free logic". Contemporary instructors are "digital immigrants" who have come to the technology over time, but were not born with the seemingly innate technical savvy of their students.

With Peachy's language courses, he is against the banking method of language learning (deposit/withdraw facts), and instead incorporates active participation in learning environments, mimicking those found in popular massive on-line role-playing games like
World of Warcraft to address topics in language. To supplement his courses, Peachy has create a virtual space for his students to live in when not in class. This allows them to interact with one another, build, and work on their lessons outside of formal class-time. This investment of students into the creation of their environment fosters attentiveness and interest.

Regarding language learning, Peachy stressed getting out of the classroom box which, in his words, "is not the best place to learn language". Second Life, by its nature, is an experience- and socially-driven environments which encourages role-play, and obvious tool to teach/learn language. With role-play, Peachy recommended setting up a loose framework in which students can let their dialogue emerge organically. He compared this to playing jazz where musicians are free to play within a given construct.

Some issues to consider when using Second Life for language learning is training both teachers and students on how to use the interface. He also emphasized to teachers to keep the text to manageable chunks, not overloading digital notecards and kiosks with tons of information.

One language-learning task Peachy enjoys assigning is asking students groups to create machinima (animated Second Life movies) in the language they are learning. The could be actual short films, or could be commercials, interviews with historical figures, etc.

Peachy did warn that we do lose paralinguistic features in Second Life (body language and facial expressions). It is hard to gauge student comprehension from these signals, so teachers have to rely on textual or voice feedback.

I left the conference invigorated and inspired and hope to begin bringing these lessons to materials that
Bolchazy-Carducci will publish. Please follow the above links to learn more. Again, I will post the SLURL to the conference materials as soon as they go live on EduNation in Second Life.

Please comment on this article! We are witnessing the birth of a revolution in language pedagogy.