The video chatroom on schola has seen a lot of action recently - and seems to be developing quite nicely.

There is currently a regular Comenius reading group - it does not have a schedule - lead by Molendinarius, this group is reading through Schola Ludus. When it meets, an email is sent out to all members of Schola, who, if they are at a computer and have some free time, can log in and participate.

Laura Gibbs will be setting up a regular Vulgate reading group. This will… Continue

Three days ago, the usual suspects were chatting away in the viva voce locutorium when someone had the idea to message everyone in Schola (over 1200 members now).
Suddenly, the locutorium came alive, faces we had never seen before appeared, and the conversation went on for some hours.
Yesterday we did the same thing again - this time, the regulars had been given… Continue

I've not posted an update about Latinum recently: Here is the latest clustermap showing visits to the site since May 2009:

Comprehensible Input is important - but even more important, I think, is input per se - whether comprehensible or not. It is the sheer volume of material that helps your brain get to grips with new structures and word /sound patterns that are not present in the native language morpheme set. One needs to re-hear, or be re-exposed to sets of language data many hundreds of times for the information to become hard wired in the brain.

I suspect it is the INPUT aspect of comprehensible… Continue

Today I finished recording all 154 chapters of Comenius' 'Orbis Sensualim Pictus', in Restored Classical pronunciation.
The book is recorded phrase by phrase in Latin-English-Latin, and can be used without reference to the actual text, although Comenius' illustrations are useful, and the text was designed to be used accompanied by the engravings.
You can find parts of the recording on Latinum

The CD, with several… Continue

Why listening to Latin is important

Dr Sulzberger has found that the best way to learn a language is through frequent exposure to its sound patterns—even if you haven't a clue what it all means.

"However crazy it might sound, just listening to the language, even though you don't… Continue

The Rosetta Stone is one of those seminal texts - something we have all read about, and recognise the importance of - but how many have ever read it, or know anything about the contents of it?
This short reading of the Rosetta Stone in Latin, is something of a curiosity, presents Heyne's translation into Latin of the Greek text of the inscription, read in restored Classical Latin on Latinum by Evan Millner.
Heyne, Commentatio… Continue

One reason I have poured so much energy into my Latinum projects, is that I believe that large amounts of exposure to the language are needed - more hours than can be supplied in a classroom setting - to acquire fluency. Also, our students nowadays are more inclined to listen to an audiobook or a soundtrack, than to read.

I would not necessarily recommend that Latinum materials be used in the classroom - they are not specifically designed for this,(although some materials might be… Continue

Underwood now on the podcast

I have decided to release Underwood's Medical Latin course as a free offering, via podcast: I am just in the final stages of uploading it, it should be completed in an hour or so.

Why Latin teaching has to change.

"Today, every laptop with an internet connection contains more information than the Great Library of Alexandria. At its peak, that library contained 700,000 books, until the Christian Emperor Theodosius I ordered it burned down in 39AD; today, Google Books has over seven million – and that's before you count everything else online. In 1941, Jorge Luis Borges wrote a short story imagining a "total library" containing all written information. Seventy years later, it exists." Johann Hari,… Continue

Finding a Cheap way to produce CD and DVD Latin

I have been very unhappy with the CD service provided by LULU and by Amazon's createspace - the charges were just way too high.
I have now found a company that lets me produce CD's and DVD's at a price even a schoolpupil can afford - $2 -
and postage in the USA is very low, and international standard airmail is reasonable. ($4)

I have so far put online my Corderius CD, which contains 50 odd… Continue 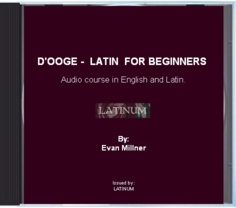 A growing selection of audio resources for Latin - both Classical and Neo-Latin, will be available here.

Prices are set low enough that a student can purchase several titles. 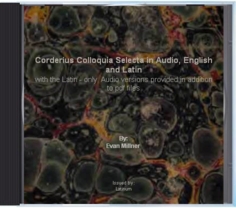 An even more useful toy

The avator from oddcast will commence play unprompted. This makes it impossible to use more than one iteration on one webpage, as they all start to talk at the same time. However, the avatar from voki has a play button.

China is steadily rising up the list.....if I could provide the podcast in Chinese and Latin, it… Continue

Your students know more than you think....

Recent research has shown it can be demonstrated that the brain responds to newly learned information, even when it cannot be consciously recalled in a deliberative effort.

I suspect that a mechanism related to this is operating with natural language learning: not all knowledge is testable, and the brain's sub-cognitive memory is probably kicking in during language processing.....meaning the whole is greater than the sum of the parts....

Here is the… Continue

Our vocabulary continues to grow and expand even in adulthood. Just ten years ago, the word ‘blog’ did not yet exist – and now we no longer remember when we heard this word for the first time or when we learned its meaning. At some stage new words become just as familiar to us as words we have learned earlier. One of the areas of interest in the Academy of Finland’s… Continue

After watching what has been happening on SCHOLA for some time, I have decided we now have enough members to split the group - and have started a new NING site, devoted purely to academic matters, leaving Schola as a more informal social venue.

I have called the new NING site Universitas Scholarium and my hope is that Neo-Latinists , Classicists, and others will… Continue

Why Latin helps your English reading get faster.

ScienceDaily (Aug. 19, 2009) — With a vast majority of the world speaking more than one language, it is no wonder that psychologists are interested in its effect on cognitive functioning. For instance, how does the human brain switch between languages? Are we able to seamlessly activate one language and disregard knowledge of other languages completely?

Press refresh page to view animation: from: "History of the Alphabets" taught by Prof. Robert Fradkin at University of Maryland.